This is the question on everyone’s mind when they talk about future emissions–which way will China go?

China consumes more energy (125 quads in 2014) and emits more CO2 (9,595 million metric tons) than any other country in the world. As a rapidly developing country, they are set to use a lot more energy and emit a lot more CO2. And that’s besides a very real (and very well publicized) commitment to be as green as they can be. Within limits…

You will see below that no matter how green China wants to sound, their future development will necessarily depend on coal. Their future exploitation of nuclear, hydro, wind and solar will deliver less than 20% of their total energy needs–and that’s if they actually live up to their ambitious plans for non-emissive energy. If the economy slips or the wrong guy goes to jail, their green plans can yield a lot less. 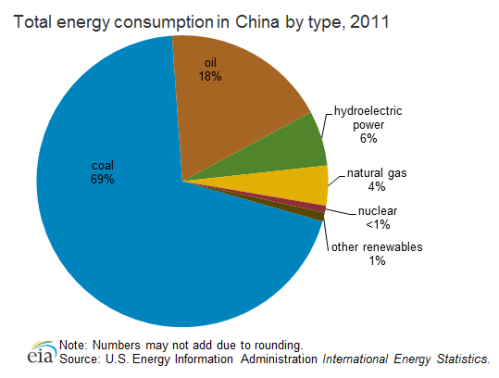 The EIA has forecast that China’s energy consumption will increase to 219 quads by 2040. (My estimate is that they will consume 255 quads). More importantly, China has said they hope to reduce their reliance on coal–from its current 69%  to… (drumroll…) 65%. That’s 142 quads if you like the EIA’s projections, or 165 quads if you prefer my numbers. Sadly, if my number is closer to the truth China will burn more coal in 2040 than the entire world (including China) did in 2014.

China is building green infrastructure, no question about it. However, they are also building a lot of coal plants. Which will win out in the end?

China currently has 23 nuclear reactors in 8 plants across the country. They provided 1.25 quads of energy last year. They have 26 under construction. They expect nuclear energy to triple by 2020, to 3.75 quads, which would be 3% of the total energy China is supposed to consume by that time (the EIA’s figure, not mine.) They hope to bring the total up to 15 quads by 2040, which would be a bit over 10% of the EIA numbers, less than 10% of mine. The most ambitious nuclear energy program since France went for it big time will not eliminate China’s need for coal.

China has 235 GW of hydroelectric power installed throughout the country and it produced 7.5 quads last year, 6% of the total.

About 100 dams are planned or under construction on the Yangtse River alone. China has big plans for hydroelectric power. The EIA projects they will reach 409 GW capacity in hydro by 2040, which should yield roughly 14 quads.

China managed to get about 0.45 quads from wind and solar last year, from about 90,000 wind turbines producing 133 billion kw hours. The EIA expects that to grow dramatically, to 716 billion kw hours by 2040, producing 2.4 quads.

Solar provided about a tenth the power of wind last year, 0.04 quads. The EIA expects that to grow to 10 times its current level by 2040… so it will be less than half a quad, 0.36 quads to be precise.

China will get roughly 32 quads from non-emissive sources in 2040, according to EIA projections. That would indicate that China will use primarily coal to generate either 187 or 223 quads in 2040, depending on whose numbers you like more, the EIA’s or mine.