The Philippines consist of 7,107 islands, which of course makes planning difficult. Rapid development makes it more of a challenge. The Philippine economy grew by a robust 6.1% in 2014. Their population has grown by 45% since 1990, to its present level of about 100 million, but 8 million have been added since 2010.

The country is in the midst of an energy crisis, as the growing economy and population have created a demand for energy that outstrips supply. The country is currently experiencing blackouts and rotating brownouts that are causing disruption to people’s lives and the overall economy. The same has happened in many developing countries. The difference with the Philippines is that it has enough wealth to deal with it. But not without controversy.

The Philippines already have the most expensive electricity in Asia and prices are rising–something about supply and demand going on over there. This has led to charges of collusion, if not outright corruption, among and between energy suppliers.

They are now meeting unexpected high demand by the use of diesel generators, highly polluting and highly emissive of greenhouse gases.

So, what are they planning to do about this in the future? The EIA shows current capacity and planned construction for the next two years. 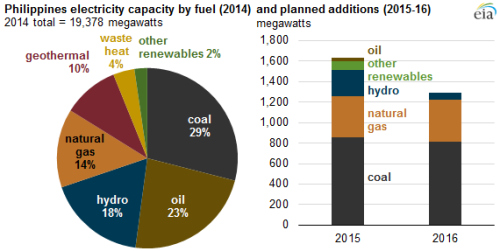 More than half of their new capacity will be powered by coal–what readers here will recognize as what I have labeled the inevitable reaction to supply shortages. Whether coal ends up being better than diesel generators will depend on what type of power plants they build.

But between 2012 and 2013, energy consumption in the Philippines grew by 10%. If growth continues in the same vein, this additional construction will leave them in exactly the same position they are in now.

Although the Philippines have significant geothermal production and are working hard on building up solar power, they import half of their primary fuel supply.

Once again, we see that inadequate forecasting will leave the Philippines still importing expensive fuel, still facing power outages, still burning diesel fuel in generators to provide electricity–and still facing the same furor over prices, investment and the threat to growth that this situation produces.

2 responses to “When Planning Fails”