How Efficient Can We Get?

The U.S. Department of Energy’s Energy Information Administration projects that our energy consumption will increase by 10% between now and 2040. Because it also projects robust growth in population, GDP, miles driven, home starts, size of new homes, etc., a 10% growth over 25 years seems low.

The justification for such a low increase is their projection that the efficiency of energy consumption will increase dramatically. Sadly, they have overestimated improvements in energy efficiency in 93% of their forecasts…

For example, they expect miles per gallon for passenger cars to increase from the 2014 figure of 30.7 to 46.8 mpg by 2040. I don’t say that’s impossible–there are cars capable of getting that mileage today. But that level of improvement has never been achieved in our history.

The same is true for every category they examine. At the end of the day, they expect energy intensity, as measured by thousand BTU per 2005 dollar in GDP to drop from 6.79 to 3.99 between now and 2040.

That’s an improvement of 2% per year. Is that possible?

But if you look back a ways, it gets a bit dicier. About half the time, rates of decarbonization are below 2%, and half are above. But the half that are above 2% include the most recent economic unpleasantness, which the EIA specifically does not forecast for the next 25 years. They also include dramatic fuel switching to lower intensity natural gas.

The real problem for decarbonization as a strategy is that the easy stuff gets done first. Decarbonizing becomes progressively more difficult.

Globally, there is scope for dramatic improvements. Every time a villager in India quits burning dung and starts using even as dirty a fuel as coal, he contributes to decarbonization.

In fact, I would hazard the guess that historical improvements in decarbonization have been driven primarily by fuel substitution.

Making a dollar of U.S. GDP in 2009 took 60% less oil, 50% less energy, 63% less directly burned natural gas, and 20% less electricity than it did in 1975. But in an advanced economy such as the American one, we’ve already taken the easy steps. Much recent improvement is down to switching from coal to natural gas, which has proven to be a blessing–but unless coal is completely retired, has little in the way of further improvement to offer. As the DOE projects coal usage in the U.S. to increase (very slightly) between now and 2040, they don’t seem to think we’ll move much further down that road.

As with last year’s report, I also think they don’t pursue their own assumptions very rigorously. If climate change is going to make the U.S. Southwest significantly warmer, and if more Americans are going to move there (for a variety of reasons), then why don’t they show air conditioning rising by more than they do? If vehicle miles traveled are going to rise so dramatically, by almost one trillion miles, why is so little thought given to congestion and the waste energy it causes? They show no sign of projecting major construction of roads and freeways.

Do I think decarbonization at a 2% annual rate can be achieved between now and 2040? Yes. Do I think we are on the road to doing so? No.

With apologies to Arthur Conan Doyle, of course.

The Department of Energy estimates that American energy usage will grow only 10% in the 25 years to 2040. As noted previously, this is despite a projected near doubling of GDP, a 20% increase in population, a 30% increase in vehicle miles traveled and much more. 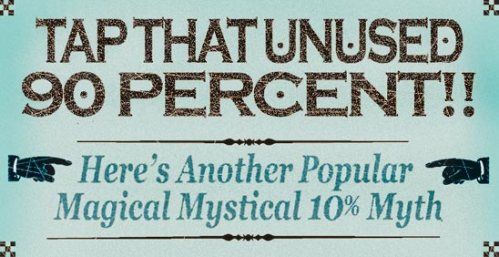 The explanation is simple, if not entirely credible. They expect energy intensity, as measured by thousand BTU per 2005 dollar in GDP to drop from 6.79 to 3.99 between now and 2040.

I hope to post soon on the plausibility of this.

Let’s start with the bad news. The Department of Energy’s (DOE) Energy Information Administration (EIA) has… pushed… the publication of their International Energy Outlook (IEO) to… October! What will I do? (Oh, yeah–get back to analyzing their report on U.S. energy…)

If true, that would mean that the part of Asia that is not part of the OECD, which will see its GDP quadruple from $23 to $85 trillion, may well have enough wealth to spend on environmental safeguards. With a little left over for some toys… 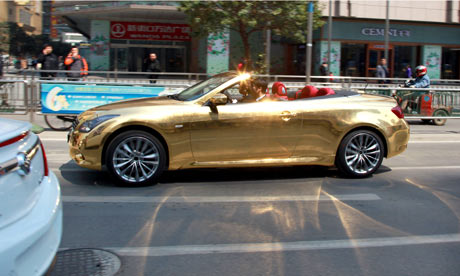 Trying to understand why American energy use will increase only 10%

The Department of Energy’s (DOE) Energy Information Administration (EIA) has released their Annual Energy Outlook for the USA with projections of energy production and consumption through 2040.

Assumptions are everything when you forecast the future and the EIA is making some assumptions that look almost heroic. They seem to assume that every factor used in estimating energy consumption can rise by more than 10% but that energy use has that hard limit–something I don’t understand. 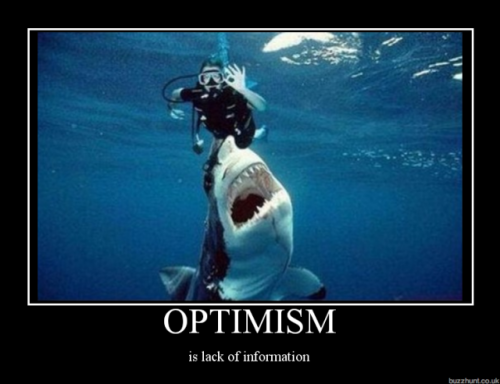 Disposable income rises by 75% but energy consumption rises only by 10%?

Housing starts increase by 25% but energy consumption increases by only 10%?

Car sales rise by 15% by energy consumption rises by only 10%?

You get the picture. I’ll be back to look at other sectors tomorrow, I hope.

The DOE Annual Energy Report for the USA is here!

Not as sexy as ‘Le Beaujolais nouveau est arrivé‘, but it’s still like Christmas at present opening time! Hooray!

I will be doing a series of posts on this report, which you might view as sort of a warm-up for the release of the International Energy Outlook expected later this spring.

One of those posts will deal with some significant changes in methodology and assumptions, which I suspect will make it difficult to compare this report with earlier versions. They include a projected drastic drop in American population totals, drastic drops in estimated vehicle miles traveled, and much more.

The headline is that they expect American energy consumption to be even lower than their previous estimate for 2040, dropping by one quad from 107 to 106 quadrillion BTUs in 25 years. They show 2014 consumption (still a projection) as 96.64 quads. 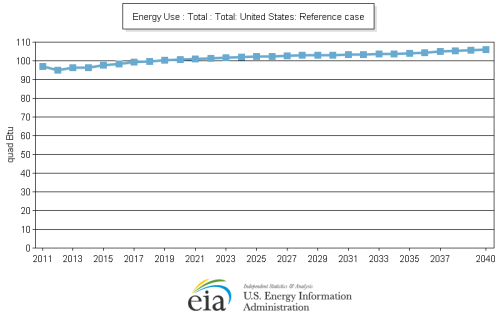 One inconsistency with that is their estimates for electricity-related losses climb from 26.16 quads to 29.43 quads. Unless all our infrastructure is expected to degrade and become a lot less efficient, this climb would imply that the U.S.will be generating about 10 more quads of electricity…

Well, okay… lots to work with, it seems!

For those of you just tuning in, this year I decided to take a look at what all this newly planned green energy would produce–if it was enough to meet demand.

What I found was pretty sad. The five top fuel consuming (and CO2 emitting, for those keeping score) countries are China, the U.S., India, Russia and China will consume about 60% of the world’s energy in 2040 (and account for a similar percentage of emissions. The second five countries account for about 10%, so it really is the top 5 countries that matter.
And each of these five countries has been pursuing (and promoting their pursuit) of green energy sources to the rest of the world. To hear them all talk, green energy is going to take over the world.
However, their planned expansion programs for nuclear, hydroelectric, solar and wind,biofuels and natural gas are not going to do the job.
In fact, if everything that is on the planning boards gets built in those five countries, the percentages of renewable and nuclear energy used will climb from 17% today to 20% in 2040. And that’s if the DOE estimates of fuel consumption (819.6 quads projected for 2040) are correct. If my more pessimistic projections are more accurate our world will be burning about 965 quads by then. And if that energy isn’t coming from nuclear, hydroelectric, renewables or even oil or  natural gas… it will come from coal.
But I decided to do a bit more research and came up with more solid numbers regarding our plans to use green energy sources and nuclear power to reduce our usage of fossil fuels. I did some number crunching using the EIA’s Interactive Tables and converted their figures into quads. I also made assumptions about percentage of capacity that would be delivered in 2040, using 70% for hydroelectric power and 80% for nuclear. (The EIA, amazingly enough counts hydro as delivering 10% capacity and nuclear at 100%, while the IEA counts hydroelectric and all renewables (!) at 100%…)

This is what I came up with. (Click to embiggen.) 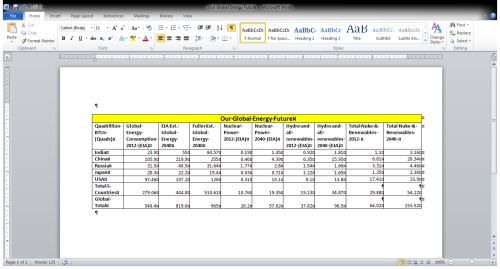 The world got 11.8% of its primary energy consumption via nuclear power and renewables in 2012, 64 of the 540 quads we consumed overall.

If my more pessimistic figures are correct, those same 153.52 quads of renewable energy and nuclear power  will amount to 15.9% of the 965 quads my projections show we’ll be using. That would leave 812 quads to be delivered by fossil fuels.

Not a pretty picture.

More than 100 million Chinese people watched this video before the censors took it offline.

As someone who lived and worked in China and who has reported on energy subjects for more than ten years, I can say that this video is honest, important and has the potential to change not just China, but all of the developing world.

If you’ve got the time go see it. I’m linking to the version on The Atlantic’s website because it has a good English translation and shows the whole documentary in one go.